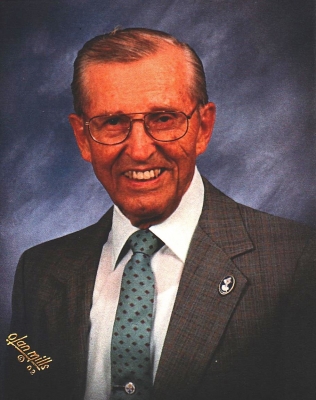 Louis graduated from Bellaire High School in 1941 and from Case Western Reserve University, Cleveland, OH in 1944. He enlisted in the US Naval Reserve in 1942 and was assigned to the US Navy V-12 Program at Case in 1943. He completed Apprentice Seaman training and received his BS Degree in Mechanical Engineering in 1944. He was assigned as Midshipman to the US Naval Academy at Annapolis, MD where he completed his Naval Officer's training and commissioned Ensign in Dec. 1944. During WWII he served on the USS John Paul Jones DD230 and on the USS Orleck DD886 where he was promoted to LT. junior grade. Upon his release from active duty in 1946, he was assigned to the Naval Reserve Unit in Warwood, WV. In 1950 he was recalled to active military duty during the Korean War. He served on the USS Richard B. Anderson DD786 as Chief Engineer and promoted to LT. senior grade. His military service awards included: Combat Action Ribbon, China Service Medal, American Campaign Medal, WWII Victory Medal, Naval Occupation Service Medal, National Defense Service Medal, Korean Service Medal with four battle stars, Naval Reserve Medal, Republic of Korea Presidential Unit Citation Ribbon, United Nations Service Medal and Republic of Korea War Service Medal.

In 1946 he began his career in the steel industry as an engineer in steel pipe manufacturing. He was employed 31 years at Wheeling-Pittsburgh Steel Corp. in Benwood, WV in various supervisory and operations management positions: Chief Plant Engineer, Supt. Of Pipe Finishing; Warehousing and Shipping Facilities; Supt. Of Pipe Welding Mills, Primary Finishing and Galvanizing Dept.; and Plant Manager. After retiring in 1977 he founded Lodais Technical Services, Inc and provided engineering consulting services for steel pipe welding, galvanizing and finishing industry in USA, Canada and Mexico. He also had European assignments in Holland and Austria. He did volunteer consulting work assignments through the International Executive Services Corps in Monterrey, Mexico and Kingston, Jamaica.

He was a member of St Mary's Catholic Church, St Clairsville where he served as Lector and Eucharistic Minister. He was a member of the Holy Name Society, Past President of Parish Council, Past President of St. Francis Society and the bingo committee. He was a Charter Member and Past Grand Knight of the Knights of Columbus Council 4243 and 4th Degree Member of the Knights of Columbus Commodore Jack Barry Assembly.

To honor his life the family wishes memorial contributions be made to St. Mary Catholic Church.  We thank you in advance for all your support during this difficult time.