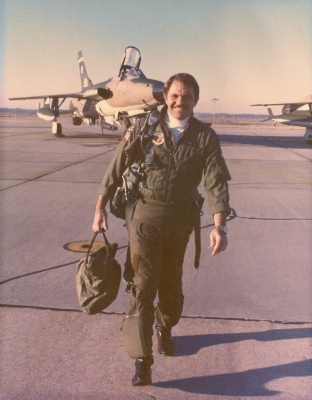 To raise funds to support the mission of Feeding America in memory of Bill Harris.

LTC William Orgain Harris III, 79, of Norfolk, Virginia, beloved husband and best friend of Amelia Frances (Matthews) Harris for 40 years passed away peacefully on March 11, 2016.  During his battle with cancer, Bill was surrounded by family and friends, near and far.

Bill was a retired United States Air Force Officer (US Naval Academy, Class of '59), and USAF command pilot with over 30,000 hours in jet aircraft.  Logging more than 700 combat missions in Southeast Asia, Bill was awarded the Silver Star Medal, the Defense Superior Service Medal, two Distinguished Flying Crosses, the Bronze Star, 34 Air Medals and the Virginia National Guard Commendation Medal in the service of his country.  His final Air Force assignment at the Joint Forces Staff College in Norfolk, Virginia brought him and Amy back to the area, family and friends they loved dearly.

Never one to slow down, Bill was the General Manager of the Virginia Beach Tennis & Racquet Club.  He went on to serve the State of Virginia as an Assistant Athletic Director at Old Dominion University. And later, he went to work at Cardinal Homes, Wylliesburg, Virginia, as a special assistant to the CEO. He was an Executive Director of Halifax County YMCA and the Hampton Roads Armed Forces YMCA. He was a docent and keeper for the Virginia Zoo in Norfolk, Virginia.

Preceding him in death are his parents, William O. Harris Jr. and Ennis Byrd (Hartley), his daughter Rebecca Harris and his brother James Harris.

Bill's final wish to donate his body in the name of science is respected by his family and friends and is a final salute to the person Bill Harris was to all of us. A Celebration of Life paying tribute to his legacy will be held at a later date.

The Altmeyer Funeral Home Southside Chapel is assisting the family. Online condolences may be expressed by clicking this link: http://www.altmeyerfuneralandcremation.com/obituary/lieutenant-colonel-william-orgain-harris-iii-usaf-retired/

. Bill requests donations be made to Feeding America. Please click the 'give now button' to help the cause.

Raised by 11 people in 30 days
Fundraiser has ended

Martin and Lidia wielechowski 2514 days ago

Martin and Lidia wielechowski 2514 days ago