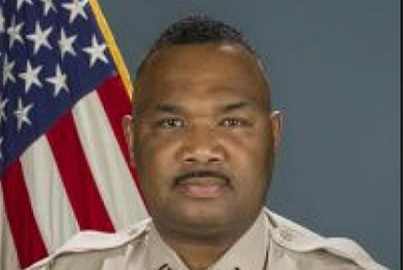 Friends of the family are asking for your support to contribute to this fundraiser to help his wife April during this difficult time. This will ensure that April will have the resources necessary to face the many upcoming financial challenges.

Friends of the family are asking for your support to contribute to this fundraiser to help his wife April during this difficult time. This will ensure that April will have the resources necessary to face the many financial challenges in the upcoming weeks and months ahead.

David was born on September 17, 1968 in Springfield, MA to his parents Mable Bragg MacAlpine and David Alexander MacAlpine. David served his country in the United Stated Marines, and then spent the last 30 years of his life with the New Hanover County Sheriff’s Office where he was Captain Mac.

David or “Mac” was a very kindhearted individual. He was always willing to give himself to others ,no matter what. Selfless would be the best word to describe him. We all know “Mac” would give you the shirt off of his back with no rebuttal in your time of need. Before you could blink, he was already taking care of the issue. A reliable man indeed. When “Mac” had his hands in anything, there was no need to worry. “I’ll take care of it”, is what he would always say.

We know that his great legacy will continue to live on. He will be missed dearly, however, anyone that knew David, knew he was not a sad individual. He never stayed down.

In his free time, he enjoyed putting together model train sets, working out, watching a good thriller movie, and spending time with family and friends. David was the life of the party. Although he had a quiet persona, he knew how to rise to the occasion.

He spent his life protecting others, he was a real life super hero, Captain Mac!

We will always respect, cherish and adore his memory. “Mac” has moved on to bigger and better things. It’s safe to say, that he can finally kick back and relax.

David was married to his dear wife April for 27 years. The two shared a life full of love, blessings, and treasured life lessons.

His Legacy will continue to live on through his mother, Mable and his wife of 27 years April Jones MacAlpine; son David MacAlpine, Jr.; daughters Aaliyah MacAlpine and husband Aric Williams, Jr of Wilmington; Delecia MacAlpine of Rincon, GA.; brother Glen Bragg and wife Jackie of Myrtle Beach, SC and sister Felecia MacAlpine. David loved his children and adored his two granddaughters Jaelyn and Faith, or “little bits” as he would say. He would get them everything they wanted, needed and didn’t need. He was actually considering retiring soon, and his reason was, to spend time and enjoy his grandchildren.

Mac was a great son; husband; brother; father; grandfather; friend and so much more.

Mac's family wishes to thank you for your kindness and support during this difficult time.

Raised by 14 people in 30 days
Fundraiser has ended

Anonymous 238 days ago
View All